Housing the largest undergraduate dining hall, a lecture hall, a student bar, classrooms, music rooms and more, Mem Hall is almost always bustling with student activity. Unlike other buildings on Harvard’s campus however, the architectural style of Annenberg Hall is unique, a fusion of New England brick with gothic arches, cathedral-like stained glass, and detail-rich ornamentation. Although a mathematical perspective can shed insight on many facets of the building, two areas of particular interest can be seen housed within the ceiling structure of the 9000-square-foot great hall.

Although the exterior facade of Mem Hall is rich in detail, the wooden arches make the interior view even more exciting. To help better understand the vaulted ceiling from both a structural and aesthetic perspective, I will focus my observations on two distinct components: the central arches, and the circular geometric features which run around the perimeter of the space. 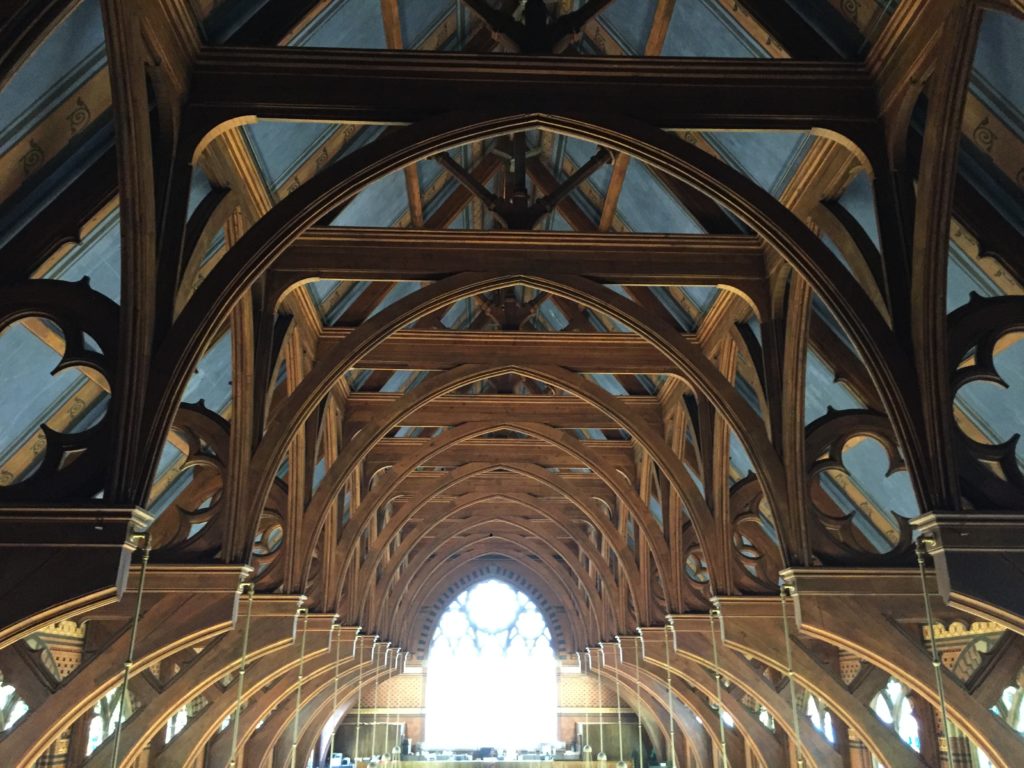 Unlike a number of arched structures on campus, such as the walkways through the dorms on Mass Ave, the arches in Annenberg are noticeably more pointed. On Harvard’s campus and beyond, arches come in all shapes and sizes. Engineers in the 21st century consider a number of factors when choosing the style of arch best suited for a structure. Every arch design has its own unique structural properties, which makes each design optimal in different settings. Beyond just structural identifiers however, each arch is also unique in its cultural identity and assembly technique.  Although modern technologies make it possible to assemble a huge range of arches, when Mem Hall was constructed almost 150 years ago, hand-drafting techniques and less advanced building technologies presented some constraints. Rounded arches, which were popular in Romanesque architecture, distributed weight through barrel vaults connected directly downwards onto external walls (think old European cathedrals with really thick walls and tiny openings for windows). The three-point arch, heavily popularized in gothic architecture–  which can be seen running though the central cavity of Annenberg– has, in comparison, a far greater load capacity with an ability to distribute weight outwards, rather than only downwards. 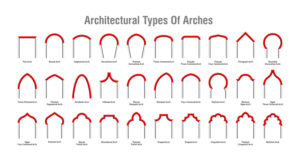 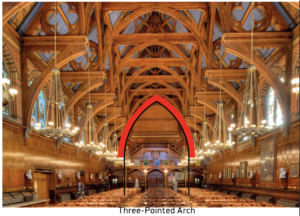 If you’re interested in learning more about different types of arches, and when different styles are most appropriate, any structural engineering book like this would suffice. You can also check out some cool online resources to garner a better sense of how the form of arches relates to materiality as well. 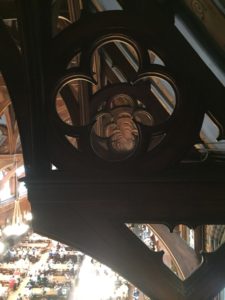 Although the arches are perhaps the most noticeable feature of the roof system, it’s the collection of a tremendous amount of detailing and craftsmanship that makes Mem Hall so breathtaking. Hiding on the outer perimeter of the arches are a beautiful series of wooden cutouts, less reminiscent of gothic architecture than they are of  Sangaku, an ancient Japanese art form involving puzzles that find relationships between circular geometries. Not only do Sangaku works often showcase beautiful designs and geometries, but they can also highlight unique properties of circles and other two dimensional shapes. 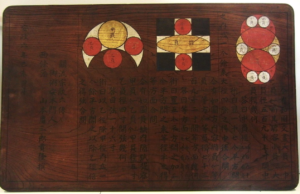 Before looking too in depth at the geometries within Annenberg, it might be useful to look at an example Sangaku problem. Take, for example, the challenge to arrange  three circles such that all three geometries share a common tangent line.  Below is one solution to this challenge, but are there others? Note in the solution below other interesting elements as well, such as the fact that the radii of the two smaller circles, when multiplied together, equal the radius of the larger circle. Sangaku puzzles often introduce interesting relationships such as this one, and in turn, lend themselves to explorations about a number of geometric relationships. From this prompt alone, one might ask if the relationship of the radii found in this solution will always hold if there are in fact other solutions. 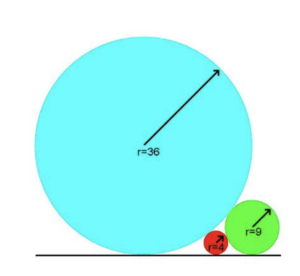 Although Sangaku problems are typically driven from a proposed conjecture, we can also work in the other direction (by first looking at a geometric design) in an attempt to better understand the wooden cutouts in Annenberg. 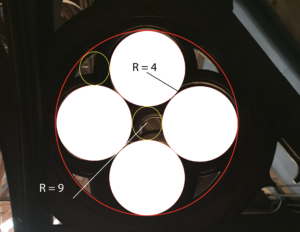 Simply by overlaying circular geometries over the wooden cutout, we already are able to observe some interesting relationships. Most immediately apparent is that when the four white circles are inscribed within the larger red circle, the radius of the circle that can be drawn in the middle of the entire geometry is equal in radius  to the circle that can be drawn between the outer red circle and two of the larger white circles (in reference to the picture, look at the two yellow circles).

In this picture, the 4 inscribed white circles all have equal radii, but after seeing this drawn out, I became curious about other ways of inscribing 4 sub-circles into a larger circle, and what such arrangements possibly dictate about radii length. Here, our 4 sub circles have combined area 4*pi(4)^2, or about 200 square units relative to the area of the red circle, pi(9)^2, or about 254 square units. We can easily see here that the tangentially inscribed white circles are therefor about 4/5ths of the area of the red circle. Using this fact alone, I was curious if I could make a conjecture about  upper and lower limits of the area for 4 inscribed circles within a larger circle. To focus this problem a bit more, let’s keep the necessity for the circles to be tangent at the 12-3-6-9 o’clock positions.   To visualize what I’m describing here, here are just a couple possible interpretations of this problem: 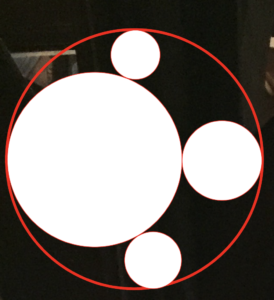 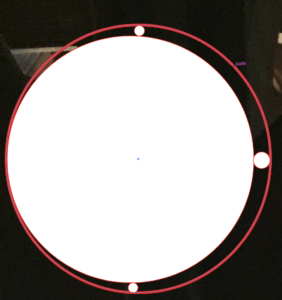 Although my inclination was that the smallest ratio of the area of the inscribed circles to the exterior circles would have come with all 4 inscribed circles having the same radius, the example on the left is approximately 3/5ths, and on the right is nearly 1:1 (in the limit case where the large circle grows even larger and the three smaller ones approach radius 0). It turns out that the ratio is smallest when one of the inscribed circles has a radius approximately  3/4ths of the radius of the exterior circle, one has a radius 1/4th the length, and the other two circles have equal radii. In the limiting cases, this puts the lower limit of the ratio at approximately 1/2, and the upper limit at 1/1.

A Sangaku dedicated to Konnoh Hachimangu (Shibuya, Tokyo) in 1859, courtesy of Wikipedia.

Sangaku puzzle in which three circles touch each other and share a tangent line, Tibbets74, courtesy of Wikipedia.