So far, we’ve created a lot of interesting small models of tensegrity structures. However, for doing public programs of the sort Storm King Art Center was planning, it’s always helpful to be able to build much larger models of things. Building giant models seems to get the ideas across more vividly, engage visitors more thoroughly, and be just plain fun.

So how to stretch the scale of these little models? I’ve experimented with using dowels instead of coffee stirrers and giant rubber bands, or sections of PVC pipe and bicycle-rack bungee cords with hooks, and several other similar systems. But Warning!: Studio Infinity does not recommend that you try any of those materials. They all share one dangerous flaw: If one connection slips, it’s all too easy for a portion of the structure to turn into a sort of crossbow, ejecting one of the rigid compression members at high velocity and potentially striking one of the people working on the structure. There is a significant possibility of injury. Do not attempt to build such structures.

Now, why wasn’t this much of a problem for Ken Snelson and his crew when they were building his sculptures? The answer is that he connected his compression members (generally large aluminum tubes) with steel cable. The steel cable has very little give, and hence there is very little opportunity to catapult one of the tubes; there will be very little motion even if tension is accidentally suddenly released on one of the cables.

However, the flip side of using a tension material like steel cable is that the tension members have to be measured very exactly for the sculpture to adopt its desired form. Too long, and the sculpture will simply hang slack. Too short, and there will be no possible chance of assembling the structure. We use stretchy materials for our models because they are very forgiving: if a section of rubber band is too short, we can just stretch it a bit extra to get the model together, and then adjust lengths/tensions afterward. That method is not possible if you’re using steel cable connections.

So here’s the construction method I shared with staff at Storm King Art Center. Let’s make a set of large pieces for an icloseidodecahedron. The key is to use cardboard tubes as the compression members: they’re very light, have no hard or sharp corners or edges, and yet are rigid enough to take a lot of compression from the attaching cords. You can get the cardboard tubes as mailing tubes from shipping supply companies, or as poster tubes, or even as the central tube of gift-wrapping paper (but note that often the latter kind of tube has thin walls that might buckle under compression). For the tension members, you can buy a spool of thinner-profile 5/32″ marine bungee cord. That material helps with safety as well; it just doesn’t pack the same elastic punch as its thicker cousin typically used for bungee cords with hooks.

Now, you’re going to need to drill through the walls of the cardboard tubes in order to fasten the bungee cord.

To prevent the tube from rolling around as you drill it, you’re going to need to fashion some sort of a jig to hold the tube in place. You can either use whatever triangular blocks you happen to have lying around (hurray for saving the leftover bits from earlier 3-D printing projects), or you can make do with rectangular blocks as well. 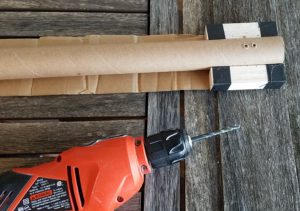 I recommend a drill press for this task if you have one, as you will get neat pairs of holes directly opposite each other on the cylinders. However, you can certainly make do with a hand drill, as this setup shows. You just may find that your holes don’t line up quite as well.

As far as what size of tube you should use, that’s really limited only by what you can find and handle without difficulty. You want a fairly narrow tube, with strong side walls. I have tested nominal 2-foot by 1.5″ mailing tubes (which are actually almost 25 inches long) and the center tubes of 30-inch wide wrapping paper (which again are a bit longer than 30 inches). 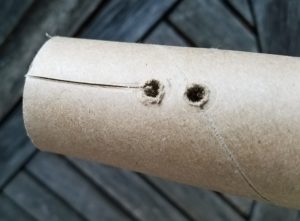 Next, we need to string the tubes with the marine bungee cord. For the two-foot mailing tubes, you need a 34-inch piece of the cord; for the longer tubes, a 42-inch piece worked well. 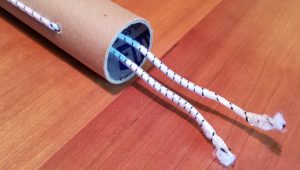 Thread the cord through both holes at one end of a tube, and center the tube on the piece of cord. Then thread each end of the cord back into the tube via the hole on the opposite end of the tube but the same side, so that the cord lies flat along 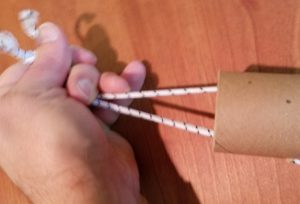 each side of the tube. To secure the cord, reach into the tube where the two loose ends are, pull both ends out as far as you possibly can, and then tie an ordinary overhand knot in the doubled cord. When you let go, the knot will disappear into the tube. If there are bits of bungee cord sticking out from the end of the tube, just stuff them inside.

When you’ve accumulated a pile of 15 struts strung with bungee cord, you’re ready to build. 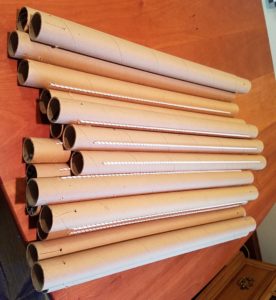 Actually note that only 10 of them need the cord, as no struts connect to the last five “expander” struts. Putting them together uses exactly the same procedure as with the small coffee-stirrer struts; here are a couple of intermediate snapshots. 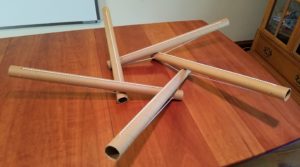 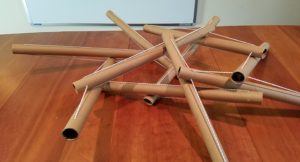 And here’s the final large-scale icloseidodecahedron: 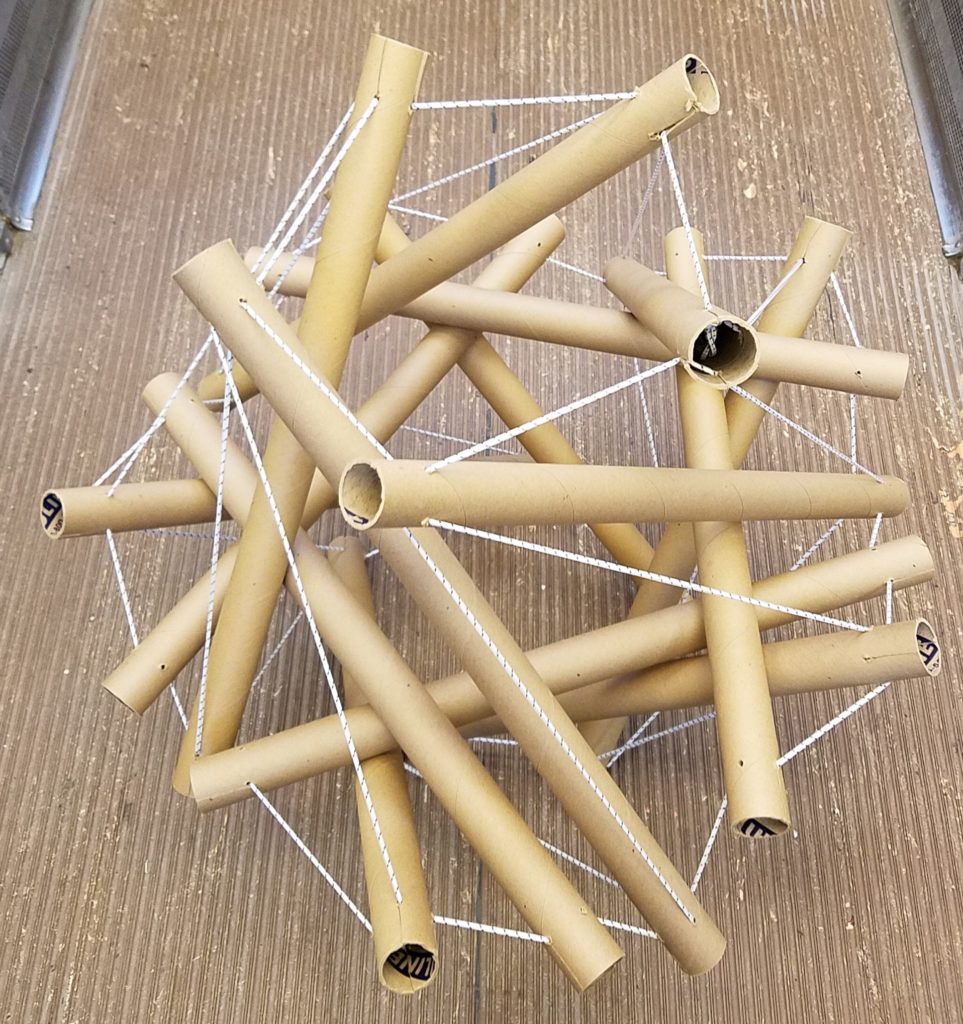 I’ll close out this series on tensegrity with some images of the staff at Storm King Art Center building their own large-scale six-strut tensegrity structures, and proudly displaying their results. 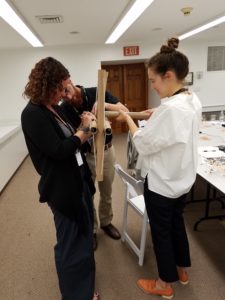 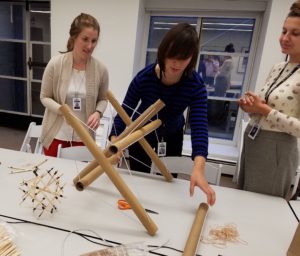 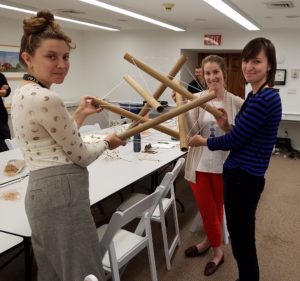 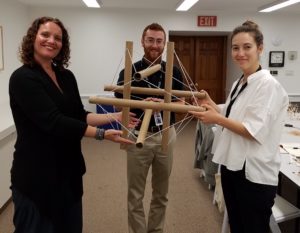